The Tabor neighborhood is located in the eastern part of Ljubljana, around the former Tabor Square today a transformed into a park. Oral history shows the name Tabor (meaning camp or encampment) most likely originates from the time of Turkish invasions when rural settlements were left to cope with the situation on their own. While the larger towns were surrounded by walls and had at least partial protection, in the countryside inhabitants walled up churches and other important village features on their own. In times of Turkish invasions Tabor was thus not considered as part of Ljubljana. Most probably at the beginning the neighbourhood formed around the church area and later expanded outwardly – towards the city centre.
The areas’ development started picking up steam in the late 19th century, with the construction of the military barracks on the northern side of Tabor Square and the Church of the Sacred Heart of Jesus on the western side. A number of industrial buildings were constructed in the area, such as the city’s first power plant (Stara mestna elektrarna), for some time the character of the district was split between industrial and residential. The residential option decidedly won out in the early 1990s. Today Tabor is one of Ljubljana’s up-and-coming residential districts and hosts important landmarks: the sport’s facility “Sokolski dom”, two cinemas Kinodvor and Kinoteka, a cultural venue The Old Power Station, the Museum Quarter where one can find the Ethnographic Museum, Museum of Contemporary Art Metelkova (MSUM), and the National Museum of Slovenia. Tabor is sandwiched on the south and on the north by two autonomous zones. 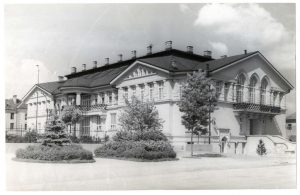 A Doublet of Landmarks – From Military Barracks and Bicycle Factory to Autonomous Cultural Zones, Metelkova and Rog

Metelkova Autonomous Cultural Zone (AKC Metelkova Mesto) represents today an important point in Tabor. The occupation of the former barracks at Metelkova in 1992, after the event, when the City of Ljubljana was unannounced and, contrary to the previous agreements, tried to demolish the barracks. Today the northern half of the army barracks known as Metelkova is home to a number of buildings which host various bars, clubs and galleries as well as to a various NGO building, libraries and social centres.
Rog factory is an industrial complex once producing bicycles and was shut down in 1991. It was abandoned for 15 years. In 2006 the area was occupied by engaged students, artists and activists. The occupation pulled legitimacy from the need for places for non-formal artistic, cultural and political activity. Today it hosts 15 organized collectives with around 200 individuals active in them. The 30 spaces give shelter to a vast artistic and cultural production, recreational activities, and activist activities.

Special attention is given on our free walking tour to both autonomous zones.