Have you wondered who is Invader, a street artist presently hosted in the The International Centre of Graphic Arts in Ljubljana? Perfect, we have for you a sweet read.

Invader is an unidentified free artist, who has reached the furthest corners of the world with his mosaics. He began his project in 1998, inspired by the introduction of 8-bit technology, and codenamed it Space Invaders after the video game. His work evolved; in the 90s he bought a Macintosh IIfx, initiating his exploration of a new world. First he used prints and paintings to represent pixels, but eventually these became tiles.

“I said, here is one Space Invader—I have invaded a little piece of Parisian space, and now I should continue to invade the rest of Paris.” 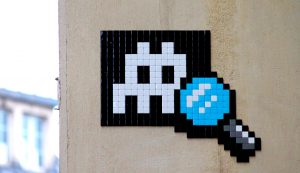 His aim, like that of other street artists, is to liberate art from institutions, whilst his abstract aim is to liberate Space Invaders from the restricted 2D world, facilitating their entrance to the 3D. Invader has invaded cities all over the world, as well as below sea level and 2362 metres above ground. He has reached the Eiffel Tower, the Hollywood sign and the Great Wall of China with his work. His movement is endless, like a game; he is addicted. 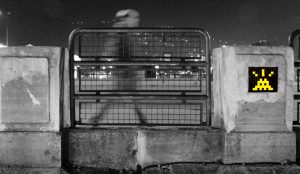 Having graduated from the Ecole des Beaux Arts in Paris, Invader epitomises the collaboration of prestige and high society with urban subculture, encapsulating a fascinating medley. His work today can be seen as a reaction to an overly elitist art establishment, an establishment Invader does not want to become part of. Such contrast can also be seen in his art; namely, through works addressing serious world events such as the Twin Towers using colourful toys like Rubik’s cubes. Contrast is also evident in his recent ‘Rubikcubism’, in which he stacks Rubik’s Cubes to create both 3D Space Invaders, and classical works like the Mona Lisa, or Jean-Auguste-Dominique Ingres’s Grande Odalisque.

Shepard Fairey has praised Invader’s clever use of contrasts, specifically through his adaptation of the historical mosaic medium to digital pixelation. His artistic development can be further perceived in his innovative digitally interactive street art. By using QR-code technology, mosaics can be scanned by smartphones to reveal encrypted messages.

His work is not limited to his Space Invaders, and he has put on several exhibitions. Yet these too are based on the premise of invasion. His 2017 exhibition at the Musee en Herbe created a playground for young visitors and their parents, an interactive exhibition invading the minds of a generation of children. 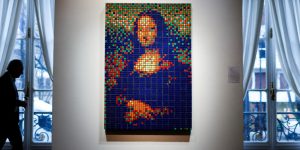 Invader’s politics are limited to the inherent anti-authority characteristic of urban street art. His goals are simplistic, he wants to decorate the concrete jungles of cities; he wants to make people smile and spread positivity; he wants to add to the city, enhance it, not take from it or destroy.

‘I don’t damage, I do work! It is what I answer to the policemen who ask me what I am doing, I’m doing my work, just like you!”

By using the streets, Invader takes back the power of institutions. He locates his work in places that are accessible to all, irrespective of status, class or wealth. His work is for all to enjoy, without cost. 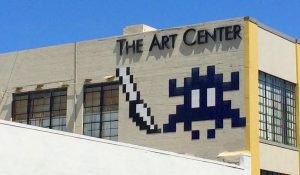 Invader doesn’t stick to global cities for his work. He has also left his mark in places like Mombasa and Katmandou. The process is not easy, and he has to conduct research before placing an Invader somewhere. He uses Google Street View to search for potential locations before working with a local accomplice who photo-documents spaces Invader might visit. With the help of his local accomplice, he lugs buckets of cement and boxes of tiles to the often difficult spaces he chooses.

‘It is very exciting to work in the streets because you kind of own the city! You can choose any spot and hit it. And it is a nice reaction to the art situation that has become very elitist.’

Obviously, it is safest to work at night, though he has explained that even then, the paranoia can become quite strong. In daylight he dresses up, sometimes as somebody like a construction worker, somebody who will go unnoticed.

For his Hollywood invasion, he pretended to be a hiker. His constantly changing identity applies to his personal life too; even his parents think he works as a bathroom tiler, the irony of his pretend profession being clear. The location he chooses also affects the style of the mosaic. He explains,

‘Once I invaded Avignon, a historical city in the south of France. I felt it was very dangerous and work wouldn’t stay there if it looked too obvious, so I made a camouflage work. I made Space Invaders the same colour as the walls.’ 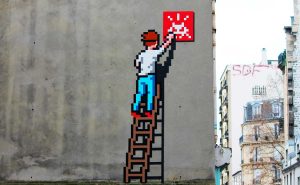 Perhaps one of his most memorable moments is when he managed to put an Invader on Jacques Chirac’s lapel when he was the President of France. Invader got lucky when he visited the FIAC Art Fair in Paris. He saw Chirac also visiting the fair, and he had a tiny ‘1point’ sticker with him and a camera. He took two pictures of him with it on before the bodyguard removed him.

In the time of writing this post, Invader has left 3955 invaders in 79 cities worldwide, across many continents and continues his mission.

Ljubljana was part of his invasions, so we are inviting you to join us on the Invader’s Street Art Tour takes you to the latest artworks of the world-famous street artist in Ljubljana, as shown in the exhibition “Invader: Prints on Paper”.