French Street Artist Invader was in Ljubljana, again in 2021 – Photos & Report, Part I

Ljubljana has been again invaded – by the world-famous Invader. Below we share some photos and notes on the second invasion wave of permanently installed artworks.

Fifteen years after his first invasion, a new wave of urban mosaics, secretly installed all over Ljubljana, was recently revealed. In this first part of the report, we unveil some of his latest works in the city, small and larger mosaics made of tiles representing pixelated images, and shed some light on the context of his street art works. In the first part, we will focus on the walls that can be found in the city center.

All in all, the entire invasion forms a unique outdoor exhibition and consists of at least 20 new, unique mosaics (we are still counting the amount of points this brings in FlashInvaders app).

The first motif, repeatedly found in various places, is the Ljubljana’s favorite pet – the dragon! As a symbol of Ljubljana since the Middle Ages, the green beast is most famously displayed on the Dragon Bridge, which leads across the Ljubljanica River. The Dragon Bridge was built at the beginning of the 20th century, when Ljubljana was part of the Austro-Hungarian Empire. Opened to traffic in 1901, it was dedicated to Franz Joseph I to commemorate his forty-year reign. It features four magnificent dragon statuses. 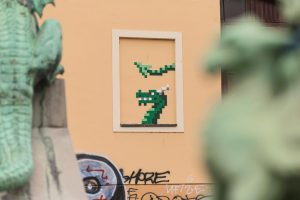 Invader has monumentalized the figures of the emblematic Dragon Bridge with a piece of the beast’s head and tail framed by an unglazed window. It will keep good company to tags and throwies below!

Invader around the Old Town

Another sweet combination is found further down the Old Town. The mosaics on the façade glow in light and dark green. Instead of a fire-breathing dragon, the monster bubbles an iconic red invader. As usual, the pieces are strategically placed throughout the city, evoking his urban acupuncture practice that he has developed over the years. 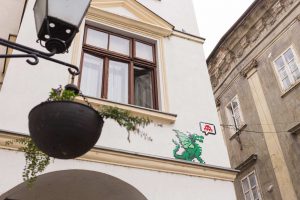 Apropos the dragon pedigree. There are several interpretations of how the dragon and Ljubljana are related. A mythological one goes as follows. The dragon is said to originate from the legend of Jason and the Argonauts. The Greek hero Jason stole a Golden Fleece, with which he traveled from the Black Sea through these lands across the Danube (Ljubljanica River flows into Sava River and the latter into the Danube). He and his crew came to a lake where they were harassed by a huge dragon, but managed to kill the beast after a raw fight. 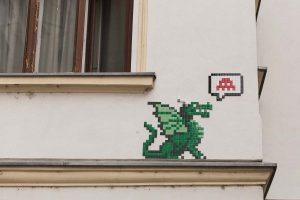 The second explanation refers to Saint George, the patron saint from the chapel of the castle church, on which he kills a dragon with a spear. Here the saint represented Christianity, and the dragon the old religion, paganism. 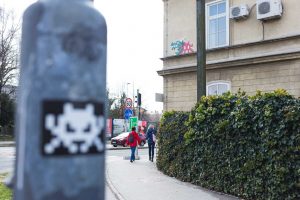 The official blazon of Ljubljana also features the dragon standing atop Ljubljana Castle. Invader’s Pixel Art has reproduced the city’s coat of arms meticulously. See for yourself, and stay tuned for the next update about Invader’s latest street art in Ljubljana. In conclusion, be sure to check our Instagram where we will keep you updated about the new wave.

Your feedback or questions are welcome in the comments section below! 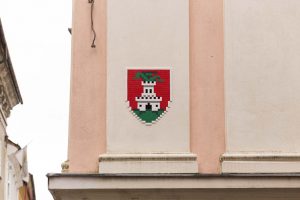